Almost everyone is familiar with the story of Bluebeard. How he gives his new wife a key to every room but orders to not enter a certain one. Of course she does, and he kills her for it. The original story by Charles Perrault was written in 1697. I doubt that most people have ever read the complete story.

I thought it would be interesting to present the original full story here in English and French.

There once lived a man who had fine houses, both in the city and in the country, dinner services of gold and silver, chairs covered with tapestries, and coaches covered with gold. But this man had the misfortune of having a blue beard, which made him look so ugly and frightful that women and girls alike fled at the sight of him. 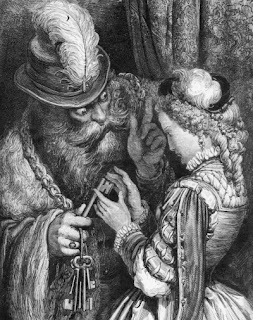 Posted by PeterCorneliusHoof at 5:38 PM No comments:

Email ThisBlogThis!Share to TwitterShare to FacebookShare to Pinterest
Labels: Life in 1700

Life in 1700: That woman opera singer you're watching was probably male!

The deliberate castration of boys was not outlawed until the early 1900s. Here is an article I found with some really creepy facts about the singers known as Castrati.

The voice of Alessandro Moreschi 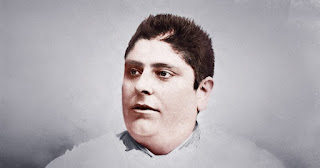 How The Catholic Church Castrated Young Boys And Made Them Sing

The castrati of 16th-century Rome – singers known for their angelic, falsetto voices equivalent to those of sopranos – were often the most celebrated in the chorus. While their voices were beautiful, the male singers designated as castrati earned their title through a disturbing ritual; these chosen young men were castrated before puberty so they would never reach sexual maturity.

When the Pope banned women from public singing in the mid-16th century, opera itself was seemingly threatened. Young boys filled in for a time, but boys' voices naturally dropped when they reached puberty. To remedy this alleged issue, the Romans resorted to body modification. These Italian singers left a dark legacy in their wake: adults trapped in prepubescent bodies. While castrati singers no longer exist, the disturbing tale of their origin – as well as the late date at which the practice was still enforced – remains.

Opera and opera singers have been celebrated throughout history, particularly by the medieval Romans. A pivotal feature of the opera was female singers capable of hitting notes at high registers. At this point in history, however, the Catholic Church forbade women from singing in any religious setting.

In 1588, Pope Sixtus V furthered the female-singer ban by restricting them from singing on any kind of stage whatsoever. This posed a major problem for the opera world, as sopranos were particularly essential to the art. Young male singers were capable of hitting the same notes as adult female sopranos, but their immature voices would break and lower as they approached manhood. In response to this perceived problem, man manipulated nature through a deviant process of castrating young boys at just the proper time to stunt their vocal cords and capture their high, youthful voices.

Creating young eunuchs was the ideal – and only –method with which to harness the pitch and power of an adult voice without compromising the light, ethereal timbre of a youth.

Italian boys with gifted voices were taken to back-alley surgeons who would heavily sedate their subjects with opium before placing them in a hot bath. The surgeon would then snip the ducts leading to the testicles, leaving them to wither over time, and leaving the subjected children in a state of perpetual boyhood.

By the early 1700s, an estimated 4,000 young men received the operation each year, but only 80 percent of them survived. The average age of a castration subject was eight, and while the practice was extremely common, it was technically illegal.

Castrati were biological men who appeared female and often acted like as such. They lived outside the scope of normal gender, much to the sexual confusion of those around them; castrati, seen as neither female nor male, were a sexual temptation for both men and women who fantasized about unconventional ways to find pleasure.

In fact, castrato singers' reputations were perpetually salacious, and their sexual exploits could be compared to those of modern-day celebrities.

As a castrato's body grew, a lack of testosterone restricted his bone joints from hardening in the typical way. The limbs of a castrato often grew unusually long, making them seraphic in appearance. This anomaly, combined with intensive vocal training, gave them unrivaled lung power, breath capacity, and large chests. Singing through small, child-sized vocal cords, their voices were also extraordinarily flexible and quite different from the equivalent voice of an adult female.

But while the form of the castrato was seen as elegant, the repercussions of the surgery were often suffered later in life when their large bones developed osteoporosis and their organs began to struggle beneath the weight of their extremely tall bodies. Depression was also common among castrati as they aged – many felt extreme mental anguish and sensitivity in tandem with an erratic mental state.

Mysteriously, research of castrati bones show that many of the singers developed hypertosis frontalis interna. This rare disease occurs when the front bone of the skull thickens, causing seizures and headaches and affecting the sex glands.

English women were unusually fond of the easily female-passing Italian castrati. Women involved with castrati would invite them to parties – appearing as a woman – and would engage in sexual affairs in spite of their watching husbands nearby.

Although the young men were normally forbidden to marry by the Church, they would occasionally receive special legal dispensation. Some even resorted to sex work to make some extra money, servicing both male and female clients.

Castrati were not only infamous for their eroticism, but also tempers, tantrums, and insufferable vanity. Regarded as highly emotional and excessive, they often engaged in catty in-fighting with other performers and friends. They were groomed for the stage, including all its drama and mercurial temperament.

Despite the massive numbers of young boys who were subjected to this type of castration, only a handful actually succeeded in their assigned careers. These chosen few lived in luxury, touring the great opera houses of Europe from Madrid to Moscow, commanding fabulous fees, and bringing both male and female admirers to their knees.

Modern science proves castration restricts the formation of testosterone in the male body and allows the male voice to grow about 63 percent longer than before the procedure. This natural process also caused the thyroid to thicken over time, creating the quintessential manly trait known as the "Adam's apple." Autopsies performed on castrati after death proved the dimensions of their vocal cords were equivalent to those a female soprano.

When the use of Italian castrati was popular, there was no anesthesia, meaning boys were either numbed with ice or forced into a comatose state by a surgeon's assistant pressing on their carotid artery. The penis and testicles were not actually amputated, but rather the vas deferens in the scrotum were cut, and the testicles would essentially shrivel and disappear. Not only was the procedure itself extremely painful, castration of this kind left lifelong physical and emotional scars.

Although the Italian castrati are the most prominent example of voluntary castration, the procedure dates back to ancient Sumeria where it was used to enslave and punish men. Eunuch singers similar to those in Medieval Rome are believed to have existed in the early days of the Byzantine Empire around 400 AD to sing in choirs and entertain the public. They became increasingly popular in the 9th century until they all but disappeared in the early 1200s amid the sack of Constantinople during the Crusades. The practice of castrating young boys to heighten their vocal ranges essentially vanished until the practice was adopted in Italy some 300 years later.

Soldiers in imperial China also engaged in voluntary castration, but not for vocal purposes. Before signing up for service, soldiers in 17th century China were castrated and employed to serve the emperor.

Known as the very last of his breed, Alessandro Moreschi – nicknamed the Angel of Rome – performed as a castrato until his death in 1922. Despite being banned from entertaining several years prior, he was castrated in 1865 and went on to have an illustrious career. He retired in 1913, but not before making the first (and only) recording of a castrato singer. Because of Moreschi's unique vocal style, however, that he sang like the classic castrato singers of the past is unlikely.

To be eternalized as a castrati was never a child's choice, and their assigned vocal skill sets limited what castrati could do with the remainder of their lives. These men were forbidden from partaking in the Church, the government, or the military, and could have no real families of their own. They were entertainers for the masses and nothing else. Some, however, found no success in opera and resorted to sex work or singing in the streets for change in order to support themselves.

Even though many adored the castrati, there were plenty who found them repugnant, and their admiration was greatly mixed with public scorn. Often referred to as geldings, nature's rejects, or capons, a great many castrati suffered from depression or even committed suicide.

The invasive procedure of castration in the name of art was banned in the early 19th century; however, Italian doctors continued to create castrati until 1870 for revered performances at the Sistine Chapel. Italy and the Catholic Church had been mesmerized by castrato singers for the past 300 years, making the so-called habit difficult to break.

While the castrati were extremely popular with audiences, parents of young boy singers were becoming less comfortable with castrating their sons. In the late 1700s, Italian families were emerging from poverty and felt no need to subject their children to money-making schemes. Intellectuals also began protesting forced castration, and many believed the practice was unnatural. An increased effort to bring women back into the theater also aided this shift – young boys were disinterested in becoming castrati, and, due to the deficit of subjects and growing moral outrage, the pope was forced to outlaw the practice in 1903.

Posted by PeterCorneliusHoof at 12:09 PM No comments:

Tune in to my interview with Phil Johnson! 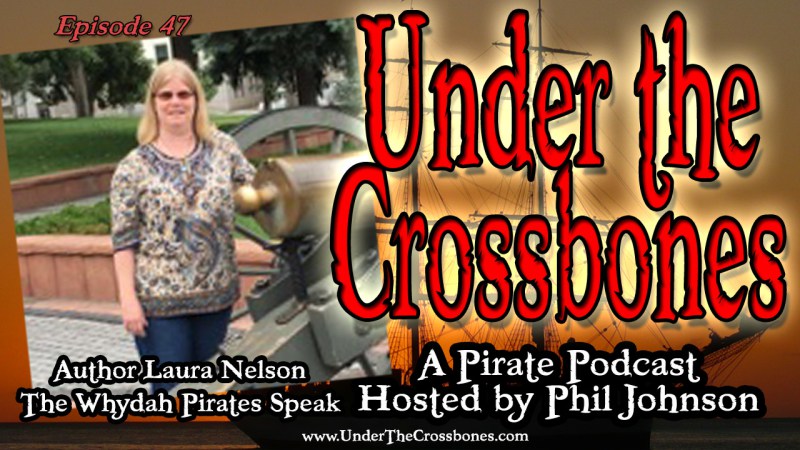 Positive reviews on itunes are appreciated! 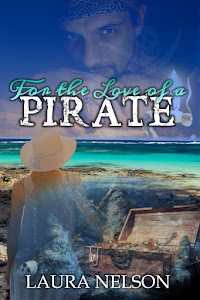 You've read the blog, now get the book 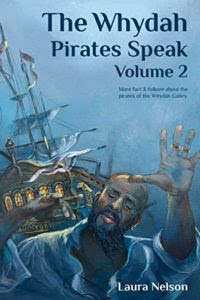 Available on Amazon in Kindle and print; also Alibris and Google Books 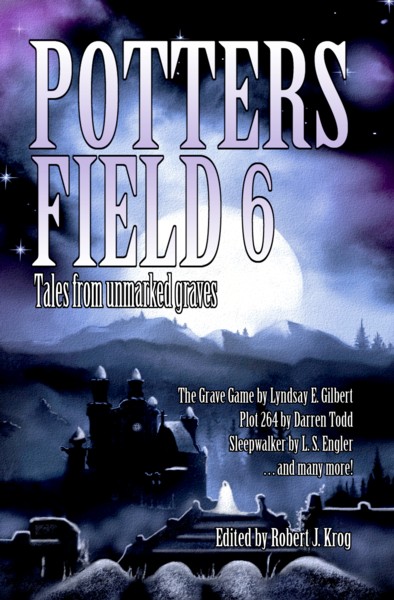 An anthology of horror stories for Kindle

Read my short story "For the Love of a Pirate" 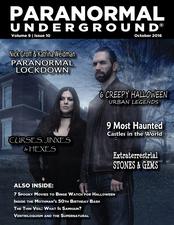 Read my short story "Rosa and the Pirate" 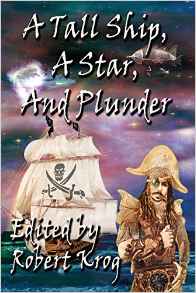 Available on Amazon in print and Kindle

I put together some articles from various websites that tell about the history of forecasting the weather. I think you might find some of t... 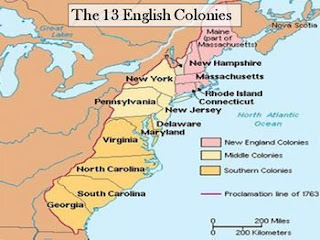